Back in the Greater Estacada Area!

Well, we're back in the Greater Estacada Area, SSE of Portland. It's beautiful here (if rainy at this time of year). Guita is adjusting well to life on the go, and she's loving all the walks we can take. The cats are OK but they have a lot less freedom than the dog, naturally. Here are the first photos from the home leave saga! 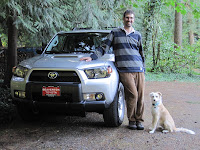 First things first, we bought a truck! It's Ian's first car, and it's a beauty. I think her name might be Mack (as in Mack Truck), but it hasn't stuck yet, and it breaks dramatically with my tendency to name cars with H names (Hamilton, Hugo, Harriet). Guita loves having her own car, but she's not crazy about sitting in the back. She got quite accustomed to riding on our laps in the 4-door Nissan Sentra taxis in Mexico! 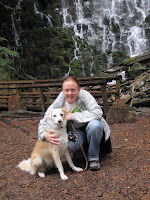 We went to Ramona Falls, a pretty waterfall up the mountain (Mt Hood for non-locals). Guita had no idea there was so much uphill in the world, but she was a trooper and still smiled for pictures at the end of the walk! 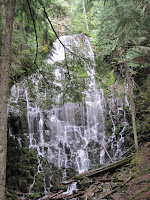 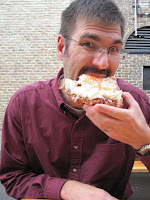 We went to Portland institution Voodoo Donuts! After all his brave talk, Ian opted for the peaches-n-cream apple fritter instead of the maple-bacon bar. And he refused to even taste the Rogue maple-bacon porter, sold by the case for only $156. I had a chocolate cruller, yum.
Posted by Molly at 4:32 PM