After leaving Moscow, we drove as fast as we could to Billings, MT, Fargo, ND, and Aurora, IL. We stayed in Aurora with Ian's parents for about 2.5 weeks before heading on to Washington and the end of our odyssey! 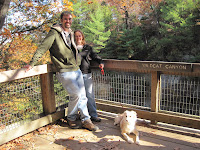 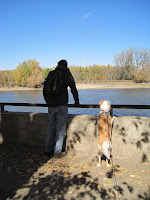 Guita is decidedly part sight hound. She loves looking over walls to see what's on the other side. In this case, she and Ian are looking at the Illinois River at Starved Rock State Park. Beautiful! 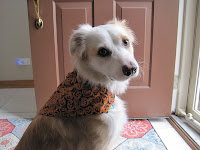 Guita takes Halloween very seriously. She loves it when children come to the door and ask for candy. Trick-or-treat never lasted long enough in Mexico, but in The Wheatlands of Aurora, I think she found doggy trick-or-treat zen. She did not enjoy wearing her bandana, but we'll work on that.

We visited the Art Institute of Chicago and had a great day walking through the museum. We saw all the best European art the Institute has to offer and we walked through the Modern Wing that is filled with... wait for it... modern art. Some of it is amazing and some of it less so (to my uncritical eye), but it was a wonderful, cosmopolitan day with a train ride at either end! 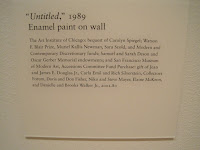 Ian's all-time favorite work of art: white enamel paint on a white wall. This particular artist got to Ian in a rather inelegant way! Ask him about it sometime; see if the adjectives still fail him! 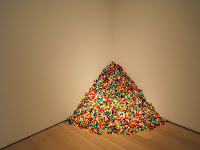 Installation art: hard candies in a corner. Adults are welcome to take a piece!

Outside the Art Institute, the modernity continued: we went to play around what can only be called the jellybean in Millennium Park. (I suppose the artist might call it something else, but to any eyes besides those of love, i.e., the mother's/ father's, it is clearly a gigantic, reflective, and highly irregular jellybean. Google Millennium Park if you want a sense of what it looks like from a distance! 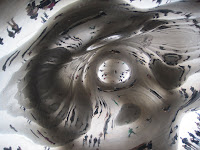 Looking straight up the belly of the bean! 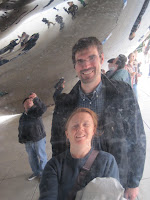 Self-portrait with spouse in the bean! 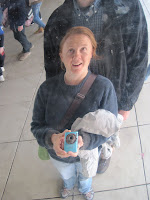 Self-portrait with partial spouse in the bean!

Guita takes a breather from the insane romping with her Malinois cousins, Hawk and Reed. She was desperate for some canine company, and Hawk and Reed provided it in spades!

Hawk and Reed in a semi-peaceful moment.

Guita and Hawk playing above ground.

Two Malinois in hot pursuit!!
Posted by Molly at 3:21 PM No comments:

We visited Indiana Dunes State Park in NW Indiana one weekend. It was a beautiful day - all sun, no wind - and the remaining leaves were intense. Guita loved it and even got off the leash for a bit of the walk!

The forest behind the dunes felt a little bit like a tromp l'oeil painting to me, possibly because of the thin brush at the base of the trees and the small trunks. It was very pretty!

King of the mountain! Or at least of the dune....

The fall plants were spectacular, and backdrop of the sand instead of dirt made everything much more visible.

Jaye of the autumn!

Ian and Gary consulting the blackberry or the map, and Guita worrying about the stragglers. Remember, Guita: she who snaps the photos is permitted to be a little behind everybody else!

Looking up into a pine tree.

Show dog!! She cleans up the Mexican Whipperdoodledollie class!

Guita returns from her run along the beach. A small bird took off in front of her and flew about four feet off the ground for 500 yards (give or take). She chased it until it flew up (instead of away) and then came back pleased as could be with herself and the world.

And the poignant, ever-present reminder of why we need to protect the world from ourselves. This is a steel plant in or near Gary, IN. There are several along the southern tip of Lake Michigan. 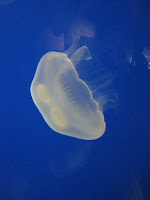 We visited the Shedd Aquarium and saw the fabulous exhibit on jellyfish. All you friends in Chicago, it's very fun! 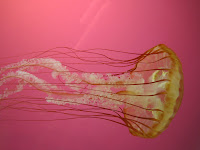 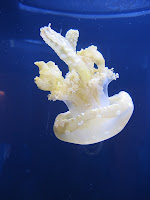 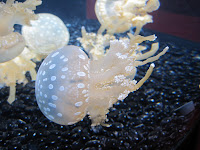 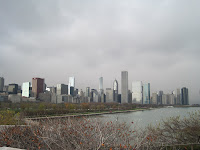 Such a fabulous skyline! 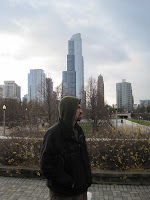 Big city, big man! This would show Ian's pensive and elegant side if he weren't blowing out his cheeks!
Posted by Molly at 2:50 PM No comments: