It's been a good long time since we updated the old blog. We've been busy with work and guests, and quite frankly we're just not that good about the whole daily blog thing. Mexico City is finally getting warmer, and we're looking forward to summer. Guita is getting really big, and she's getting smarter all the time. She's completely mastered "sit" and we're closing in on "give a paw" and "down."

Note that Blogger was not cooperative this time around, so the post is actually in three sections: Late March Part 0, I, and II. Enjoy! 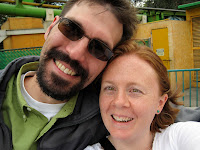 Portrait of self and spouse at speed on the twirly ride! 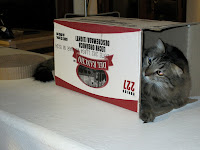 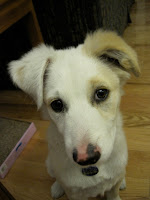 Posing for her glamour shots.... 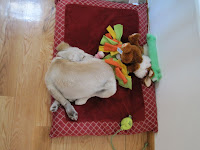 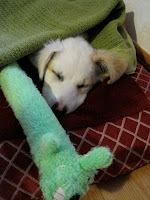 After a bath - very traumatic - Guita always needs some down time with loofa puppy and her best green blanket. She's still a baby!

Guita and her best girlfriend Mica love to play. Mica has a nice squeaky toy with ropes that really got them going the other day!
Posted by Molly at 12:25 PM No comments:

Guita and Mica love to run and wrestle!

My mother was showing Guita the pictures on her camera. Guita is a super techie hound....

We saw Aztec dancers at Teotihuacan. It was more crowded than we thought possible (around the equinox, I suppose it makes some sense), and most of the Mexicans there were dressed all in white for spring. It was pretty wild, and we won't go again on Sunday or on a equinox/ solstice!

The big church in Cholula is Our Lady of Remedies. This church - like many others in Mexico - was built from materials taken from pre-Columbian temples and pyramids. This church sits on top of the remains of the largest pyramid in the Americas and the second largest in the world. Cholula is rumored to have one church for every day of the year, but we didn't see them all.

The view of Cholula from the Cholula church on top of the wrecked pyramid. The two mountains are Popocatepetl (Popo) and Itzaccihuatl (Itza). Popo is active and blowing steam in the photo. Mexico city is on the other side of the mountains; the picture is looking NW.

Ian at the Cholula church. I cleverly traded him my cardigan for our camera! I'm a wheelin' and dealin' kind of diplomat!

Vicki and David at the Cholula church.

Puebla - the city of angels! This is a detail from the fence around the cathedral. See previous Puebla posts (September/ October 2009) for more angels.

It's jacaranda season in central Mexico!
Posted by Molly at 11:51 AM No comments:

Historic Puebla is so pretty! All the houses are bright colors, and they usually have some fancy tile work - talavera - that makes Puebla famous!

Puebla's churches are always pretty, but this one had flags! 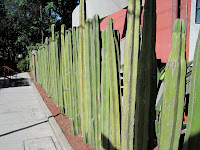 An impressive row of cacti outside the Diego Rivera studio museum. 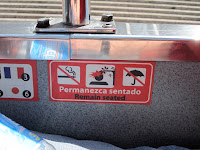 Hazards of riding the Turibus.... 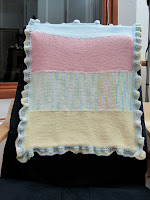 And I made a pretty blanket for a new baby!
Posted by Molly at 11:19 AM No comments: