Guita just finished her "intro to agility" course. She got a third place ribbon - better than we expected! - and enjoyed herself. The tests took so long that she was completely worn out and slept all day Sunday and Monday in recovery!

Guita's not afraid of pushing her way through the chute! I love how she's looking forward to a cookie and the next obstacle!

But her favorite thing at agility school is jumping a series of jumps. She gets some speed, and hurtles herself over the jumps! What a champ!

And the congratulatory cookie and snuggle at the end. What a sweetie!
Posted by Molly at 10:18 PM No comments:

The National Railroad Workers Union had its annual party in early December. Ian and I went - of course - and Ian was recognized as a "special guest." And this year he got the present just like the rest of the important people! 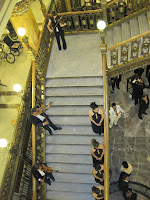 The Railroad Union party was held this year in the old Postal Palace. It was built in 1907 and restored recently. The building is beautiful with open ironwork and muted golds and pinks. This is looking down from the 2nd floor balcony at the floor below. Note the models all dressed alike and lining the stairs: there were probably 50 young women wearing make-up for the stage and identical black evening dresses. It was probably not above 50 degrees in the place, and the poor girls had to stand around and watch the rest of us have a party. They were probably all sick the next day. 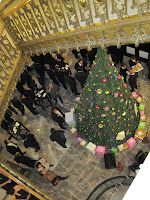 There was a big Christmas tree right in the center of the foyer. 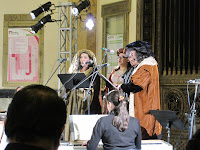 The musical portion of the evening opened with a semi-a capella group who began dressed in 17th (?) century gear, singing presumably 17th century music. They changed at a short intermission into Mexican garb from about 100 years ago (to honor the centennial of the Revolution) and changed their music to match. 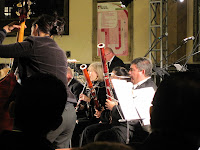 This private concert, like last year's, featured a full orchestra with two - count 'em TWO - bassoons! The Millennium Symphony Orchestra played for about 90 minutes, and the conductor, though limited in space to really move around, put his whole body into the direction. The music showcased nearly all the sections at least once. It was spectacular. 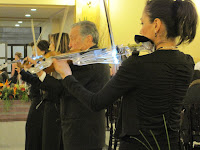 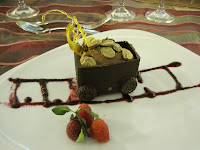 And a chocolate mousse in a chocolate train car with chocolate "gold" for dessert!
Posted by Molly at 9:58 PM No comments:

Frivolity and a Ball!

Ian - acting on orders from my grandma - got himself a highly frivolous second monitor for "our" gaming computer. World of Warcraft never looked so good.


Marine Ball
The Marines celebrated their 235th this year, once again at the Sheraton Maria Isabel. It was lovely, but we didn't take many photos....

My dress was pretty! Ian looked lovely too, as always, in his blue suit. Soon he'll have tails and a real-tie bow tie to keep up with me!

And I had my first-ever pair of silver strappy sandals. Guita loves them and wants a pair for herself someday....
Posted by Molly at 9:42 PM 1 comment: