A lot of photogenic things happen here that don't necessarily warrant a stand-alone post, so this will serve as a catch-all. 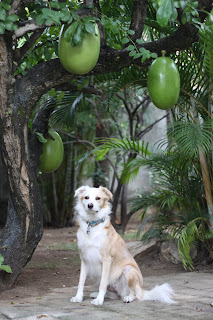 First, Guita modeled the size of the crazy huge gourds hanging from the tree in our backyard. These are no edible, and they hang from a stem about the size of the last joint of my little finger. When they go rotten, the tree drops them, and they splatter all over. Pretty crazy! 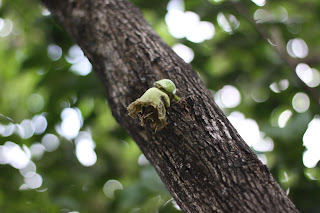 This is what the gourds look like when they're babies. It's pretty prehistoric looking! 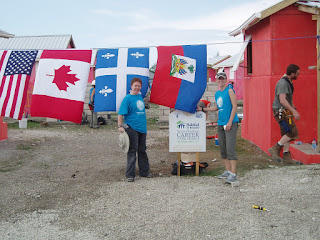 Right after Thanksgiving the Embassy sent a group of us to participate in the last day of a massive Habitat for Humanity campaign to build about 100 houses for people living in the community of Leogane. Leogane was the epicenter of the January 2010 earthquake, and approximately 90% of the buildings there were damaged or destroyed completely. Habitat is building houses that are raised off the ground (good for bugs and flooding) and half cinder blocks/ half wood. The houses are 285 square feet and have one internal room. They have two doors and three windows and a covered porch. The inhabitants got to choose the paint from a set of colors, and the construction teams (and Embassy helpers) primed and painted for about 5 hours. It was crazy hot but lots of fun! There were about 600 volunteers from the U.S., Canada, and Ireland and a number of other countries that sent small delegations. My friend and colleague Emily and I posed with the Haitian flag to show our solidarity! 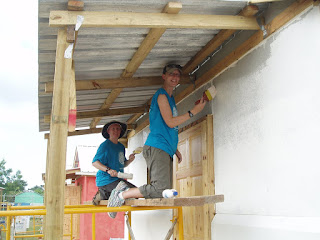 Then we got back to work priming. 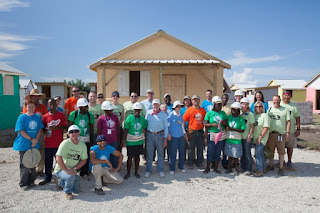 At the end, President and Mrs Carter came around to take a photo with each home owner and the team that built the house. 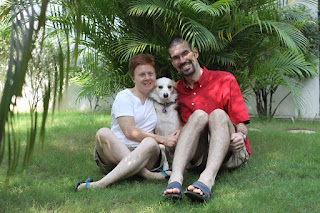 Then it was the Christmas photo shoot. Guita gets a little worried about all the fuss, but she doesn't really mind sitting with both of us and getting cuddled and petted! 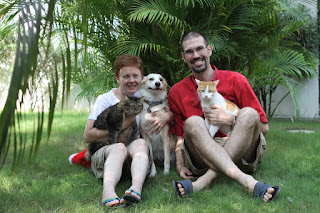 This one made the cut! We didn't inflict silly hats on the cats this year; they were pretty freaked out by going into the yard without their harnesses, and we didn't want them to take off! 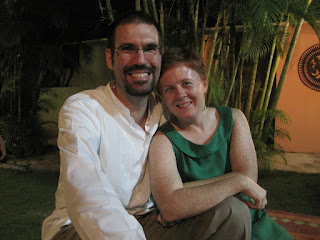 Here's a nice picture of the two of us at our first Christmas party of the season! 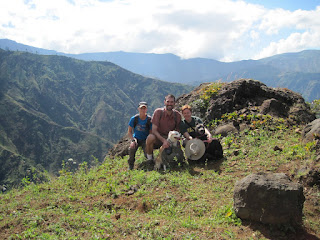 On Christmas Eve day Emily, Ian and I went back to Furcy in the mountains south of Port-au-Prince to see a different (or more accurately, the other) restaurant, Rustik. It's dog-friendly, so we took Guita and one of her best girlfriends, Lucky. We're still working on how to communicate to the guides: we did not want to go back to the waterfall (still called Bassin Bleu by the local guides, see the previous post), so they offered to take us out to "the big rock." It was about 15 minutes of walking, and it was a big rock, exactly as advertised. It was also a little anti-climactic, but again, we made the most of it and took a bunch of pictures. 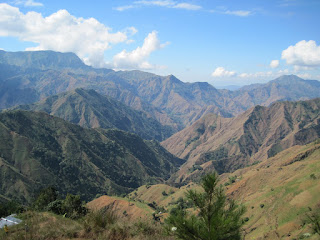 If you look in the lower left corner of this photo, you can see a person in a yellow t-shirt, and slightly to the right, a person in a blue t-shirt. That's the guide and Emily, and it gives a big of scale to the scenery! These are enormous, daunting mountains and valleys, and yet people live, travel, and cultivate them. 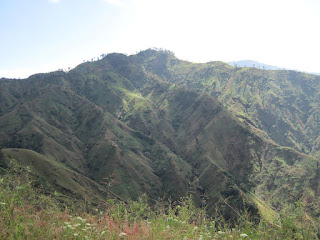 This reminds me of Switzerland, only it doesn't have the Alps behind it. 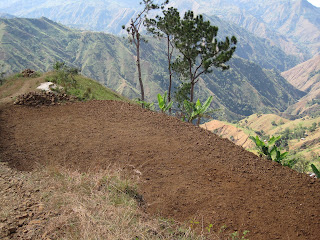 Someone is building a house here. You can get a sense of how steep it is from this picture, but it's not really sufficient. This house will sit along a ridge with a path that serves as a pretty important thoroughfare running right up against it. On the other side, it's a pretty steep, grassy drop. 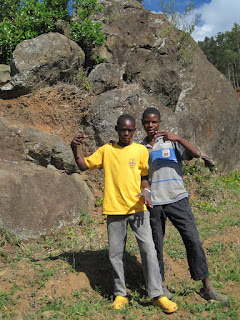 Our fearless guides, Homer and Olivier, posed with the big rock. 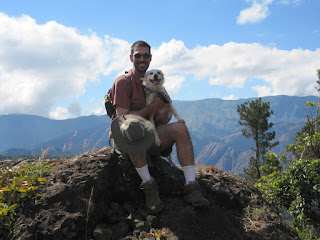 Ian and Guita took a sweet picture on a smaller rock. 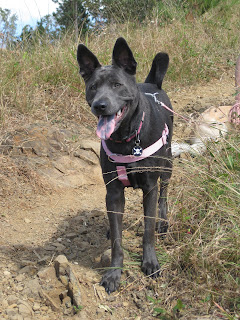 And Lucky, looking like a complex mix of sweet and tough! 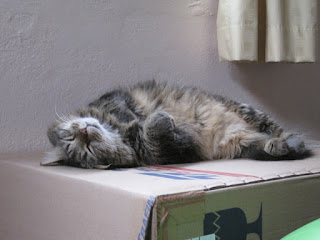 I'll finish this up with some photos of home life: first, Hugo was helping me get in the yoga mood a while back. 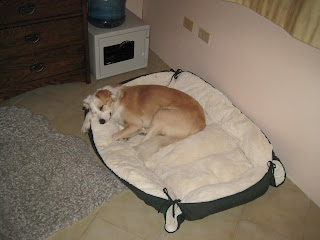 Guita was SO TIRED on Christmas Eve after her big hike and a trip to an action-movie-and-sushi party that she fell asleep before she had her bedtime cookies. She rallied to eat a few later on. 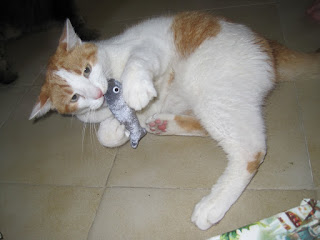 Sammy got a catnip sardine snack set for Christmas from his Grandma, and he loved the sardines! I love the concentration you can see in his ears! 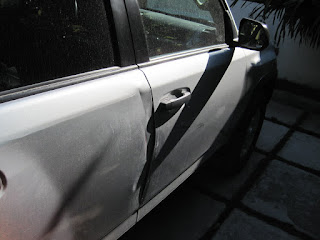 And finally, Betsy the Big Truck got whacked by a tap-tap a while ago while Ian was driving home one night. She wears her scar proudly, and no structural damage was done to her or to Ian, thank heavens.