In late January Ian and I signed up for a group trip with a bunch of people to visit one of the monarch migration sites slightly to the west of Mexico City. We went to Valle de Bravo in Mexico state where around 20 million monarch butterflies come to eat and reproduce. The site offers a rare balance of warmth in the sun, coolness in the air, and proper vegetation for the butterflies to eat while they reproduce. When we arrived, the air was very cool and the butterflies were mostly dormant. By the time we left (early afternoon), the sun was warm and the butterflies were swarming. Leaving the site, we drove at 15 km per hour (very slow) for about two miles with literally thousands of butterflies drifting along the road with the bus. It was unlike anything I've seen before.

Before getting to the butterflies, we visited Toluca, capital of Mexico state, and saw the "Cosmovitral," a heavy building with a stained glass (5000 panes of glass) story of the universe. The building now contains a botanical garden.

This bus company is highly successful in Mexico in spite of (because of?) its name and decoration. I can personally assure you now that there is nothing XXXplora about the insides of the bus: it has relatively small seats covered with Pacman-type upholstery and low ceilings.

The central arcade in the Cosmovitral. Note the super structure faintly visible through the stained glass.

The walls had spectacular birds, hawks, and owls in vivid colors.

The fire man at the entrance.

Inside the Cosmovitral is a botanical garden with an interesting mix of gardens. The stained glass throws lovely light on the plants and makes them even less like what they are.

Ian and Shannon ate street tamales out of a little cart to build up their strength for the butterflies! Apparently the green tamales are super tasty in Toluca!

Ian rode a horse up the hill! They ran out of horses, so I walked up, but we switched for the trip back down. I think he's got a future in riding - just look at his style! 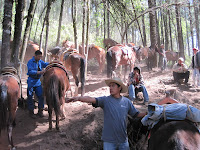 All that texture is butterflies. Around 20 million of them arrive at this location to absorb a certain level of alkaline from the fir trees which makes them toxic (or at best unpleasant) to potential predators. The noise made by 20 million butterflies is astounding. 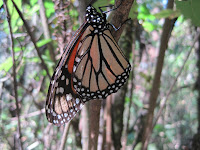 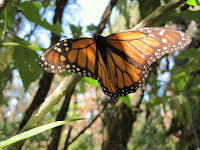 An open close up.

Butterflies on a branch. The blurry spots are more butterflies coming or going.

It is a life cycle, after all, and the ground was littered with dead butterflies, some whole and some shattered.
Posted by Molly at 8:52 PM 1 comment:

Ian and I visited Guadalajara and Tequila (state of Jalisco) over MLK weekend. Guadalajara prides itself on being the "most Mexican" of Mexico's cities, and it's also the second biggest with six-point-some million residents. We liked it, but it's a bit dry and a bit big to be a great tourist destination!

The little artists' enclave of Tlaquepaque (sound it out!) is filled with street art like this very tall purple lady!

It also has an awesome sculpture of pure bliss!

The pigeon is slightly more philosophical and tranquil than Father Miguel Hidalgo, father of Mexican independence.

We saw Mexico's famous roof dogs. This one was particularly displeased about the Turibus passing under its eaves.

Walking along the pedestrian zone, we thought we saw a monument to broccoli!

Unfortunately, on closer inspection, it was not a monument to broccoli.

The cow climbs up the building!

A modern twist on the golden arches. This one is burger-and-fries free!

This is a monument to a major stampede. Now it's in a different kind of stampede: the center of a traffic circle!

We saw this traffic sign from the Turibus and were pretty glad we didn't have to figure out how to navigate it! Traffic in Mexico is messy at best!

The Guadalajara area has all sorts of traffic complications.

On Sunday we got up early to go on the Mundo Cuervo tour! I made Ian have a photo with the bus, and then all the other tourists did the same thing!

The tour took us first to an agave field overlooked by the Tequila volcano. It's a double volcano, and the vertical in the middle is part of the first core. There is something about the soil and its minerals that makes agave grown in the shadow of the volcano the best in the world, according to the Cuervo people who source their agave from here.

An agave worker, Ismael, hacks back an agave plant to demonstrate the processing. He's got several specialized tools - all of them are very sharp!

Ismael hacks the agave plant into the "pineapple" that can be processed. The pineapple weighs around 20 kilos, and every six kilos of pineapple produces about a liter of tequila.

The ovens cook the "pineapples" to separate the sugars and starches from the rest of the plant. Note the steam coming from the top of the door.

The "pineapples" come out of the ovens looking dry and crumbly.

The display of the Reserva de la Familia line was quite lovely...

But Ian decided he likes the expensive "Clase Azul" much better than Cuervo's finest!

And then they sell only the finest tequila at shops along the highway.
Posted by Molly at 9:28 PM No comments: