Guita is settling in, and we're all adjusting to having her here. The cats are doing really well, but Sammy still gets tetchy sometimes. Guita is learning all about the difference between inside and outside and the difference between "toy" and "finger." She's growing like a weed and is now a bit taller than Hugo. Her paws are bigger than they were, but she hasn't hit mudflap stage yet! Enjoy the photos! 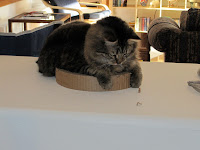 Hugo is Guita's favorite (we're hoping he whacks her but good soon), but he still finds time for his favorite hobby: tearing cardboard to pieces! 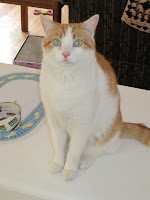 And Sammy still loves us too. 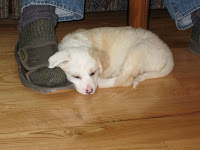 Here little Guita is modeling by Ian's feet. Someday we'll do a now-and-then comparison to see how much she's grown! 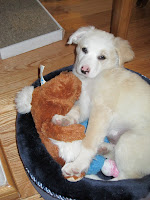 Guita loves her bed, but it gets pretty crowded sometimes! In this she's like her Aunt Nellie, but she hasn't graduated to carrying shoes yet! 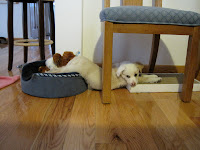 Guita spends a lot of time not quite all the way in her bed.... 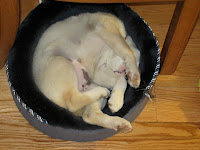 Even when the whole dog makes it into the bed, she still sometimes has logistical issues. 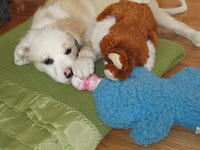 Loving on her favorite toys: Bunny, Blue Baby, and Puppy Kong. The only one missing is Scary Mousy! 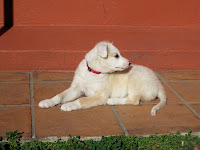 Basking in her little garden. 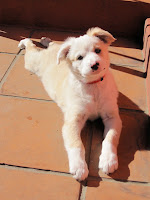