Guita and her BFFs!

Guita has several BFFs in our neighborhood, and Sunday we went for a walk in a nearby forest preserve with several of them - both canine and human!

Guita is a happy little dog when she takes us for walks!

JoJo - what a sweetheart!

Isabella the basset poses for her picture. She's so pretty!

Lola vamps for the camera...

And braces herself for the sister-smooch!

Portrait of our new neighbor, Mike. He's on his way to becoming a BFF!

Isabella the basset in action! Lola the basset was also on the walk, but I missed getting a good action shot of her. Next time!

JoJo in action! Look at that blurry corgi speed!

Action shot of the people as well. After all, some of Guita's best BFFs are people!

Guita thought hard about chasing squirrels today, but none caught her fancy.

JoJo the corgi in off-road mode. The hill was steep for her little legs, but she's plucky!

The roof of the ex-monastery. We've never gone in to learn the history because the site is not dog-friendly, and we've never bothered going without our baby!

Detail from the plaza in front of the monastery.

The ex-monastery has working aquaducts that feed a water system below the buildings.

-----
Nature shots: this is not how people think of Mexico City - even those people who live here!

OK, not really ka-boom, but it's a good title, no?

The 17,800 foot volcano, Popocatepetl, that forms part of the SE ring of mountains around Mexico City let off a huge plume of ash Friday morning. We are in the WSW part of the city, so no ash has reached us (yet?). Popocatepetl is not dormant but is almost always blowing jets of steam. Its neighbor, Itzacihuatl, also in the 17,000 foot range, is dormant and has been for many years.

Even without the ash in the sky, Mexico City's air is so dirty right now that we can't see the mountains. So we didn't see the ash plume, but yesterday on the drive home the gray air looked darker to the south (towards the volcano), and it looked like the dirtiness had hit an air wall (like you could see where the upper winds picked up the ash). 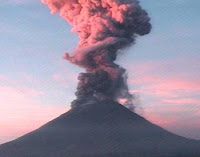