At the end of the day, we headed to Bonampak, deep within the Lacondon jungle. It is a small site, but it has original paintings on the roofs and walls in a three-room temple. We had a lovely guide show us the sites and consequently learned quite a lot about the area. 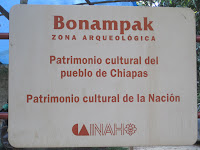 The left-hand temple, halfway up the pyramid at Bonampak. The right-hand temple has three original paintings on its walls, showing the naming of a successor, a major battle with an unidentified enemy, and the victory celebration. Apparently the paintings were made towards the end of Bonampak's glory days, and when the site was abandoned (circa 900 CE), water leached a mineral down over the paintings and a protective mineral build-up kept the paintings safe from the ravages of the jungle for 1000 years. They were found, naturally, by accident in the late 1990s, and the exposure to the jungle air is damaging them. The reconstruction of the paintings and their meaning is astounding.

Bonampak is in a part of the world known as the Lacondon jungle (selva lacondona). The people who live in the area are the Lacondon group, and this is a traditional outfit: shapeless and long. The adults seem to wear white, but this young girl was in brilliant purple. (She was posing for another photographer, so this photo in no way damaged her soul.) Most of the Lacondon we saw in the area had long, loose hair and wide mouths. They run the area and the tourist site but receive little federal support for maintenance, according to our guide.

Stela #2 shows a marriage ceremony between the governor of Bonampak and a princess from Yaxchilan, a union that united the two cities. The governor's mother is also in the carving in front of the governor. She is pricking his finger and collecting the blood in a a bowl (carried by the princess behind the governor) to encourage fertility in the relationship and in the earth. The stela shows obsidian and conch shells - both foreign materials - that attest to the powerful trading center that Bonampak was. The glyphs at the top-right describe the images.

Stela #3: dealing with a powerful prisoner, if I'm not mistaken. Romance about lost civilizations is jolly, but the Maya were not kind to the vanquished.

Looking down at the well-tended grounds of Bonampak from the pyramids. It was about 4.00, and everything was golden.

Bonampak abuts a biological preserve, and these parts, above and behind the main complex, remain un-excavated.

This is the runway that was once the only easy access to Bonampak. Now there's a highway, thank goodness, because the price of flying in made the visit hard to justify!

On the way home from Bonampak, shortly before stopping at our second Zapatista roadblock, we came across this badly wounded boa constrictor. Presumably it's a wild animal (as opposed to a pet), but it was barely moving and barely breathing. I stayed in the van; Ian and my mother heroically got out for pictures.
Posted by Molly at 7:42 PM