On Tuesday (March 22) we went with a tour to ruins outside of Palenque called Yaxchilan and Bonampak (see previous post). Yaxchilan is on a spur of land in the Usumacinta river and can only be reached by boat. 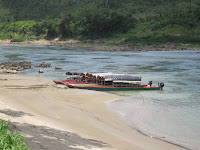 These are the boats we rode up the river! The Usumacinta river is the border between Mexico and Guatemala: on the near side (where the boats are) it's Mexico; on the far side, it's Guatemala. This border is described as "porous" by people who work on immigration issues, and from this photo it's clear to see why! 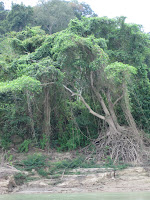 Awesome root system on this tree. Chiapas' rainy season starts in late April, so the river will probably get bigger in short order!

Egret on the water. 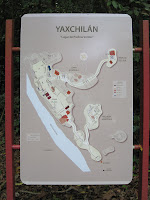 The map of Yaxchilan at the entry. The site was active and populated from around 600 CE until around 800 CE, according to archaeologists. Because of its location, i.e., on a big river that reaches the Gulf of Mexico, it was probably a powerful trading and religious center.

A standard ruined interior of a small temple. I believe from reading the explanation posted that this ceiling is in "trilobulate" architecture. If trilobulate is truly a word in English (haven't looked it up yet), it is on its way to joining defenestrate among my favorite words. Presumably it means peaked but with a flat plane at the top, as most of these roofs are. If it's just a mistake in translation, c'est la vie and I'll wait for another new favorite word.

This is one of the stelae that remains. It shows probably a governor or other ruler of Yaxchilan with symbols of power around him. At the bottom are 12 glyphs (the boxy figures at the base of the stela) explaining the story.

Incomplete excavation on the remains of a temple. It's easy to see how the jungle gobbled the ruins over 1000 years and left them disguised as hills!

The temple at the top of the highest pyramid. Note the central statue of a person with only one leg. Yaxchilan is known for its carvings and sculptures.

Looking down the steep stairs to the highest Yaxchilan pyramid. Note the trees growing in the stairs - it must have looked so different when it was an active community.

On our way to the small acropolis, where we saw...

Howler monkeys!! We'd been hearing them all morning, and rounding a corner on our way to the small acropolis we saw them. Five or six were moving around in the trees, playing and wrestling with each other. Kudos to Ian for taking the pictures!

Monkey! I love how its fingers are so visible and how it's just sitting on the branch, resting. 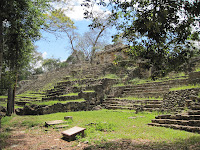 The small acropolis seen from below. 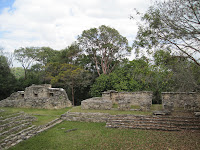 The top of the small acropolis. There was nobody else there, just the sound of the howler monkeys and random birds. It was great.

The equivalent of the maple tree's helicopter seed from a ceiba tree. Those trees are awesome! 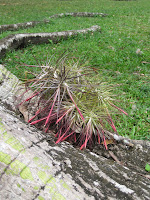 Probably a shoot for a ceiba tree, but I'm not sure.
Posted by Molly at 6:17 PM